skip to main | skip to sidebar

to go orders:
as chefs, we search every nook and corner for the perfect china. a search that will never end. we love plates. its our canvas because we are artists. the way we plate our food is done on purpose. the location of the foods is premeditated. the colors we use, the cuts we make, the molds we use, the temperatures we use, it all comes to play in our presentation. so when a to go order comes in, its all thrown out the window. everything that we work for has to be placed in a plastic container. a container where it will (in no doubt) be thrown and messed about on your commute home.

how do you want me to plate hot foods with ice cream in a to go box? how do you expect to have the same experience?

sorry to sound like a whiny brat, but this is my open forum. this is my passion, this is my career.


kitchen: what are some of your pet peeves?
Posted by plinio at 12:05 AM No comments: Links to this post 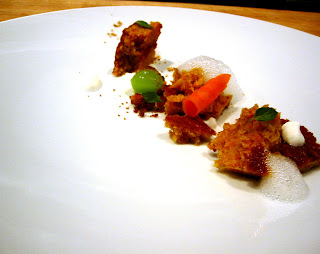 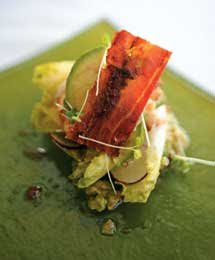 we've made pat's pick
Posted by plinio at 8:21 AM No comments: Links to this post

but thats just a snack that i'm not sure i want to turn into a dessert. instead i'll play off the idea of making pea caviars.

alinea and under pressure 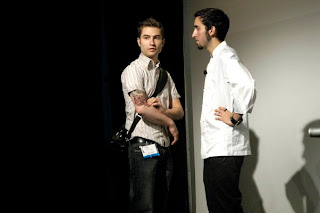 i've been so busy at work that i barely had time to read these new books. when i was at the bookstore and saw them (i didnt pre-order them like everyone else, i know. i'm lame.) i was giddy and hopping. i felt like a kid at a candy store.

but looking through them, neither book mentions jordan kahn and alex stupak. why? maybe they do, but you have to read the really fine print.

i think jordan kahn is one of the absolute best pastry chefs around. from what i understand he created liquid sable (as he describe on a food arts magazine). under pressure has a sesame oil sable that reads exactly like jordan's liquid sable, yet no mention of jordan kahn. but maybe jordan developed this recipe when he was working with sebastian at the french laundry.

and alex stupak. i havent seen his name in the alinea cookbook, yet there are pictures of him and jordan.

well. maybe i havent read too much into it, but i highly admire these two pastry chefs and hope they get proper acknowledgements
Posted by plinio at 9:42 AM No comments: Links to this post pb & j
Originally uploaded by fuzzzycatt
some new things to look for at textile. today, chef scott tycer has launched his 7 course tasting. it's incredible, you must come try his food. its solid and beautiful, but please leave some room for dessert.

some changes. due to a post on b4ueat, i have tried to minimize the use of the pumpkin fondant. its a solid dessert, but i agree, a bit simple for what is expected at textile. the pumpkin is now only found on the 5 course tasting. it has been replaced by the pb & j (pictured) on the a la cart menu.

shortly after finding out about this event (and also finding out from the website that gravitas was participating), i started planning on what to do. what are you doing?

i could do something traditional, but none of you are expecting that.

i coud do something with savoy cabbage as a play on the name, but ...

and well, for the last 2 years i have been playing around with smoke, chocolate, bacon and bbq without any success. not until recently.

at my tenacity dinner, i made smoked brownies as part of my mignardises. success!! they all loved them.

shortly after i was at gravitas pondering on how to make a brownie better. i searched for the perfect recipe before landing on elizabeth faulkner's brownie recipe. i loved it! i changed it up, i add a little more brown sugar and omitt the baking powder. i like my brownies to be very dense so that you dont need to put them in the oven. (pet peeve: hot brownies? you had to do that because the brownies were like a brick. you needed to warm them up to soften them. but mine have so much chocolate and sugar, that they are amazing right out of the cooler.) so i made smoked brownies, spiced peanuts and vanilla ice cream.

the interplay of the spiced peanuts and chocolate reminded me of mole. the only thing missing was the chicken. but how to do that?

so here are some thoughts on my savoy truffle ... and because we are in texas, there has to be texan influence.

i like the 'on a stick' sch-tick. because we all know we cant refuse food on a stick. but i am not sure how many people will be ok with bbq, chicken and pork being introduced as dessert form.

here's a few ideas i have been messing around with ...
(i think im just trying to use sam mason's peanut butter powder and homaru cantu's fizzy grapes/citrus techniques all in one dessert)

heat butter on high until milk solids separate from fat.
add milk powder and keep cooking, the point is to brown the milk solids.
(the addition of milk powder intensifies the flavor and adds a nice brown color)
once its riche deep and a dark brown, add all of the remaining ingredients.
whisk and bring to a boil.
blend on high for a minute and cool for an hour.
then its all left for your ice cream machine to do its magic.

enjoy!
Posted by plinio at 10:12 AM No comments: Links to this post 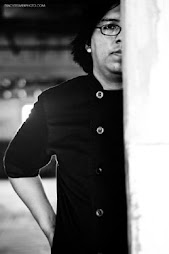